You can not add comments

Only friends can add comments

Han Sang-gyun, head of the Korean Confederation of Trade Unions (KCTU), surrendered to police on Thursday

He is accused of inciting violence at an anti-government rally on 14 November.

On Wednesday police began an operation to enter the temple to arrest him but delayed it on the request of the monks.

The monks warned said it would be an act of religious persecution for police to raid the temple.

"If the police raid the temple, it... will be tantamount to a state clampdown on the Jogye Order and on the whole Buddhist movement in South Korea," temple officials said in a statement. 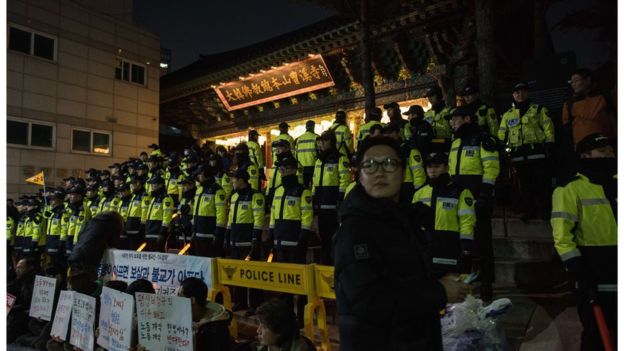 As hundreds of police surrounded the temple on Wednesday evening, the executive chief of the temple held a press conference saying the Jogye Order would resolve the issue by noon on Thursday, after which police suspended the raid.

On Thursday, Mr Han finally emerged, paid his respects at the main temple, addressed his supporters and the media, and then gave himself up to waiting police.

South Korean religious venues, particularly Christian churches, were often used by political activists seeking refuge in the 1980s. There is no law preventing police from raiding such buildings but they have often opted not to. 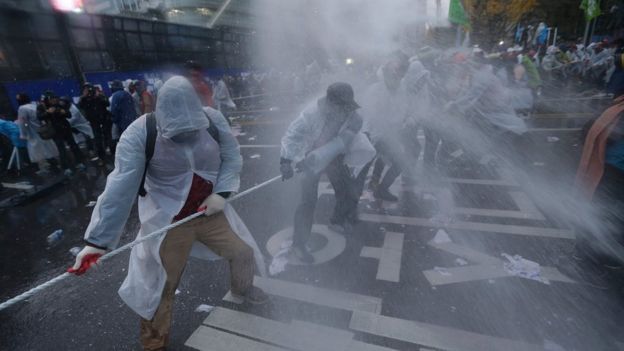 Those at the protest in November had a diverse range of grievances, from President Park Geun-hye's plans to make it easier to sack workers, to a decision to use only one, state-approved history textbook in the nation's schools.

The rally, which the government says was illegal, saw clashes between police using pepper spray and water cannon, and protesters, some of whom were armed with metal pipes and sharpened bamboo sticks.

The subsequent police crackdown prompted a smaller demonstration on Saturday - 14,000 people, rather than the 60,000 estimated at November's protest - to demand an apology from the president.

Ms Park has drawn the ire of labour unions and farmers for planning to make it easier to dismiss workers and to cap the salaries of senior employees. However, many of her labour market policies are more popular with the general public, according to polls.

The BBC's Stephen Evans in Seoul says there is an increasingly bitter division between South Korea's conservative government and its left-wing critics, who accuse it of diminishing democracy.